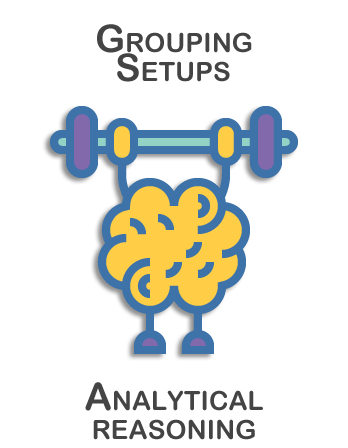 Grouping setups include assigning people to shifts or determining which activities a group of people choose to participate in.

The above setups are slightly different in that in the first scenario, people are placed in shifts, whereas in the second scenario, activities are assigned to people.

Order is of no significance in grouping scenarios. If both Pierre and Lina are in group A and group A has precisely two people, it doesn't matter who was first or second.

Grouping arrangements may sometimes feature the more straightforward 'in/out' rule, whereby either someone is in a group or not.

Statement 1: There are four vehicles.

Statement 2: Two of the vehicles are blue.

Statement 3: One of the vehicles is a convertible.

If the first three statement are true then the convertible is blue.

If the first three statements are true, which of the following statements must also be true?

Pamela is in the gift shop

Six friends, Abbie, Ben, Connie, Dave, Emily and Frank, are at the beach and are looking into how to pass the time.

Their decide on beach volley, swimming, and sunbathing.

Three more people are swimming that there are playing beach volley.

If Abbie, Ben and Connie are all sunbathing, then who is swimming?

Dave, Emily and Frank are swimming. 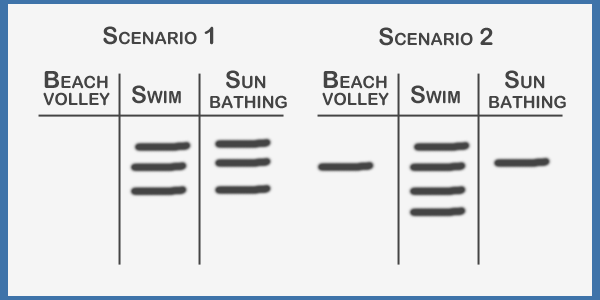 Because of the rule that there are always three more people swimming than playing beach volley, there can only be two scenarios.

Given that three people are sunbathing, the rest can only be swimming, according to the first scenario.

A college debate society meets on Monday, Tuesday and Wednesday.

1. Which college student will make a speech on Wednesday? 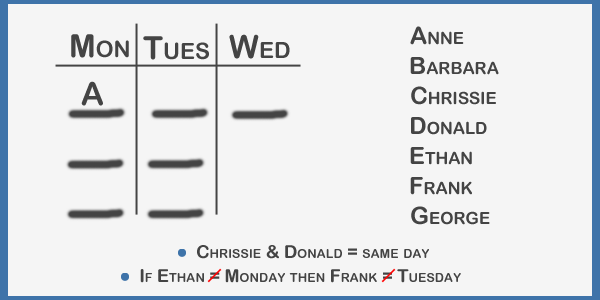 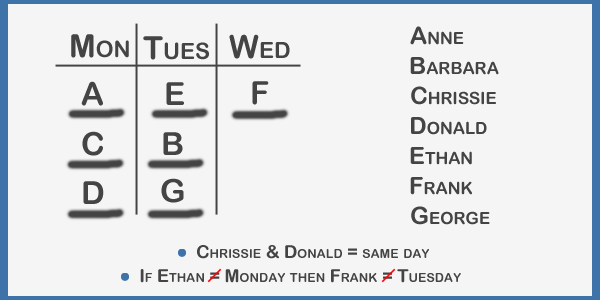 The diagram illustrates the only correct scenario according to the rules.

The only other scenario places C and D, on Tuesday. In such a case, the Ethan Monday rule cannot come into effect, leaving no more information to place anyone in a spot.